IT’s all in the Game is not a difficult game. The game rules have been structured in such a way that most people will have no difficulty in playing the game.

You start with the basic game, with only a few rules. Once you have mastered this, you can add extra rules to bring more depth to the game.

Do not forget to download the setup sheet. This sheet also contains the translation of the Event Cards.

And to help you out a bit more, you can use this game overview while playing.

No event cards| Do you think the event cards add too much luck? Then you should use this variant.

Adjusted rule: No event card is drawn at the beginning of a new round. This phase is simply skipped.

It makes the game even more tactical than it already is.

Different starter player | Not the player with the least money.

Adjusted rule: The player having the most cards on hand becomes the new starter player. Most of the time it is a disadvantage, being the starter player.

In case of more players with the most cards on hand, the player closest to the last starter player becomes the new starter player.

By the way: you can play all variants with or without the extra game rules. 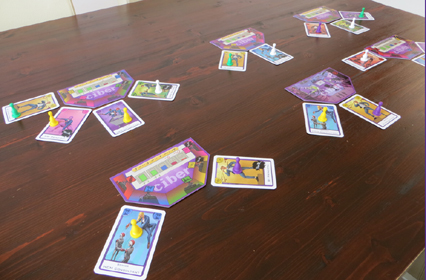 Go to the next page about its-all-in-the-game