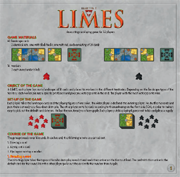 Limes is not a difficult game.

The game rules have been structured in such a way that most people will have no difficulty playing the game.

If you think the example of the woodcutter contains a mistake, take a look at the FAQ. You will find a better example and explanation of how the woodcutter works.

Alternatively you can watch Matthias Wagner from Abacus explain the game in this Youtube video:

It is Limes, but also different

Regular attacks from the Germans forced the Romans to build a wall at the border: the Limes. The border was long and needed a lot of towers and watchmen. There were only a handful of watchmen on these towers, they did not stand a chance when the Germans attacked. In case of danger the watchmen could alert each other using fire signals. Warriors from the larger camps would then come to their rescue.

The variant Signal Post takes up this part of roman history to incorporate it into Limes.

My advice: You are not allowed to move the scout. This adds importance to building your network of towers.

Line of sight: The Signal post is a tower and blocks line of sight for other (watch)towers.

If you need more than two cards, you can print out a sheet with six extra cards yourself.

By the way: the translator somehow thought that attacking “barbarians” created a feast for the romans and decided to translate the signal fires as bonfires. 🙂

Would you like to play Limes with a nice twist at the end of the game? Then use the variant One Last Card.

This variant adds one more round to the game. So you play 17 rounds.

You do not place the 17th card in the normal way, but you place it on top of your landscape. It must cover exactly 4 squares and can overlap 1 or more cards. It can not protrude outside the existing landscape.

If there are workers on the squares where you place the card, these workers return to your stock.

After you have placed this 17th card, you can place or move a worker, just like you normally do.

Are you looking for an extra spark of light in the dark part of the year? Use the Lighthouse to lighten up Limes.

Print the cards and place them at the table.

When you draw card number 24, you do not draw a new card in the next round. Instead, you take the Lighthouse and add it to your landscape.

Add the Lighthouse to your landscape, just like you would add any other card. If you place or move a worker onto the Lighthouse, this is the lighthouse keeper.

Continue playing until the game ends. If card number 24 is the last card drawn – or does not get drawn at all – the Lighthouse does not come into play.

Scoring: At the end of the game, the lighthouse keeper receives 1 point for every water square that has a direct connection to the Lighthouse. (see also the illustration).

Line of sight: The Lighthouse is a tower and blocks line of sight for other (watch)towers.

Do you need an extra challenge? Try Limes for Profis.

In this variant every worker scores in two different ways. Try it out and let me know what you think!

Would you like to begin with a different setup? Try the different starter cards that came along with an issue of Spielbox.

In this variant you shuffle the starter cards and deal every player one card. This is the first card of your landscape. Now continue play in the normal way.

You can also download the back side of the cards for a more professional look. 🙂

Go to the next page about Limes